Only a Swimmer Knows the Feeling

The Meet on Paper

Men’s NCAA Projections: Based on the Psych Sheet and assorted data crunching, Michigan projected to win big… Cal, Florida, Indiana, and USC round out Top Five… Stanford and Texas well back in 8th and 9th. On paper…

This doesn’t mean anything. Let’s get that out of the way right up front. The meet isn’t swum on paper. Titles are won in the water. Yes, yes, tell us something we don’t know…

Ok, how about this? Michigan is about to run away with the men’s NCAA swimming championships. They could DQ a bunch of relays and swim like crap, and still win it. At least that’s what the numbers are saying. According to a detailed analysis of the Psych Sheet, top relay times from College Swimming.com, and a hand entering of all diving data, based on Diving Zone scores, here is what the scoring looks like on paper heading into the meet: 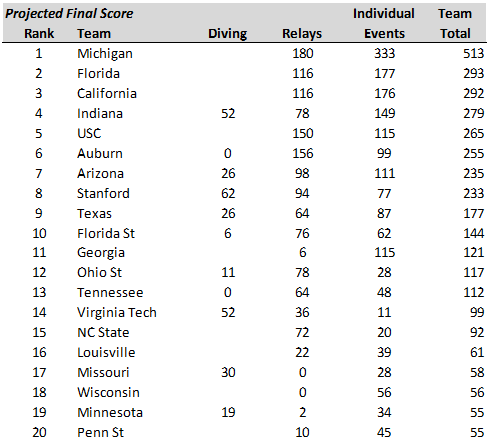 The above projections were compiled by a smart New York financier and close friend by the name of Steve Williams. It might be of note that Steve was a member of Michigan’s 1995 winning NCAA team – the last time Go Blue won it all in the water. No bias or anything! But as a man who makes his living making well-researched statistical financial projections, the hard data happens to support his rooting interest. In this case, the math is pretty straightforward. Swimming is a sport of numbers, and a Psych Sheet is as objective a document as any financial forecast. He notes that the diving is a little subjective, since, well, diving is a subjective sport. But in Steve’s words: “I entered all the diving data by hand from the divers who made the meet.  I used their absolute Zone performance scores to rank them per event.  This was a pain in the ass, but I used Zone scores, as a diver is only as good as their last performance.”

Nonetheless, these projections do not reflect the relative preparedness of when these qualifying times were posted. Some swimmers, like say Cal and Stanford, were merely in tune-up mode at their conference championships. They were far from peak performances, so big improvements can be expected. Meanwhile, teams like Indiana may have been flat-out rested at their conference meets, so perhaps a bounce could be in the cards. (The Hoosiers jump out on those rankings. Knew they’ve made big strides as a program, but to see them projected ahead of so many longtime powers is a bit of a shock…)

All conference tapering aside, it seems like an extremely good bet that Michigan will race to its first title in 18 years. Not to jink them or anything, but huge congrats to Coach Mike Bottom and Co for returning a proud program to the top of the heap… However, the rest of those projections reveal that the remaining Top 10 will be a tightly contested battle. Cal and Florida appear to match up with identical numbers, in the relays and individual events, and Indiana is just 15 points back in the 4th spot. USC and Auburn are placed in a virtual pre-meet tie in 5th and 6th, separated by just nine points. And Arizona and Stanford are just two points apart in 7th and 8th. One false start on a relay; one bad prelim session; one sick superstar – that’s all it will take to turn all these projections upside down.

So, in the spirit of March Madness, after analyzing the data, and knowing a bit about the swimmers and the coaches in play, here are my picks for the final Top 10 this Saturday night:

8 Comments to “The Meet on Paper”